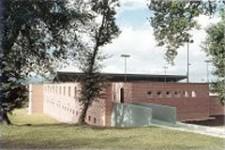 Developed with funds from CUS, the sports centre includes a gym and two outdoor tennis courts, a single complex that looks like a large court, 69 x 41.50 m, enclosed by brick masonry. The location chosen, on two spacious terraces at the top of the area, near the entrance to the campus through Via dei Vestini, is easily accessible also by external athletes and the public. The courts are located in a comb-shaped layout, a subtle structure at the top of which there is a walkway protected by a wooden pergola that connects the floor of the parking lot to the stands for the audience.

This path, 2.60 m wide, is not only the fundamental distribution element of the facility but also an important observation place that overlooks, between walls with windows, the courts, on one side and the valley of the university campus, on the other.
The gym area is defined by a large metal roof and a full-height glass wall within the yard. The roof, separated from the brick masonry by a ribbon window, looks like a stand-alone metallic element which is prolonged, with a large overhang, to protect the stands of the tennis courts.

A double staircase with opposing views separates the gym from the tennis courts, creating the stands for the audience of the two sectors. A row of metal pillars, placed at the centre between the two stands, supports the big window, creating a clear separation between the spectators of the gym and those of the tennis courts. This plan allows the autonomous and separate use of each facility, and a good connection and visibility among the sectors in cases of simultaneous operation of sports activities on the several fields.

Under the stands there are the changing rooms of the gym, which are reached by a protruding staircase that breaks the continuity of the long facade on the valley. Two other entrances are located respectively on the front down and on the square accessible by Via dei Vestini: it allows easy access for people with disabilities and emergency vehicles.

On the northern side, a small part of the building, on square base of 5.30 m, holds, on the ground floor, the heating system and, on the upper floor, the toilettes for the public, linked to the stands by a deck-pathway made of metal panels. The roof of this small block, also a metallic structure painted in grey, has four pitches that close around the chimney of the heating system.

The access to the tennis courts is through an open staircase leading to path covered by a pergola. Near this entrance, leaning against the wall on the east side, there is a small uncovered staircase that led to the creation of other seats for the audience. The tennis changing rooms are located in the southern building under the pergola path.
The building is made of load-bearing masonry of solid brick with two yellow open face heads, characteristic of this area. In the upper part of the gym, there is a series of steel box-shaped pillars, resting on a concrete continuous bead inserted in the masonry, that stand out to support the roof, cutting the ribbon window. The span of the roof, which has an opening of 24.15 m, is made up of welded metal trusses, 1.50 m high, with a projection of 6 meters on the tennis court stands.

The covering floor is made of insulated corrugated sheets, as well as the side locks that, on the outside, are covered by strips of riveted metal sheet, painted in grey, like all the metal parts and the window frames. Rainwater in the cover is drained by four large gargoyles in painted metal, protruding on the west side.

The size and orientation of the courts, rotated slightly to the north-south axis, comply with the CONI standards for the approval of competitive activities. The maximum capacity for the audience is 150 seats in the gym and 285 in the tennis courts. The playing field of the gym, parquet flooring, is 38 x 19 m to carry out different competitive disciplines (volleyball, basketball, handball, football). On the southern short side are the storage rooms for sports equipment and the office for CUS employees to monitor the facilities. The tennis courts are paved with synthetic material of green-set type and equipped with lighting for night tennis games. This building gained, in 1986, the "European Award for sporting facilities".